1: Urgent Needs in the First Hours 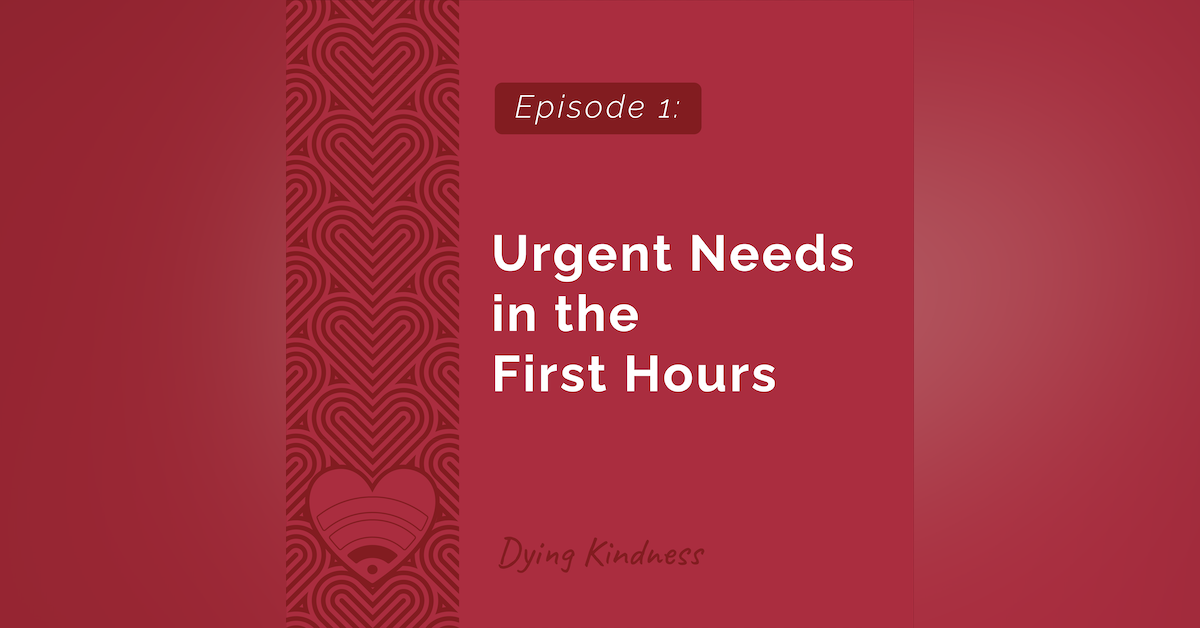 If you were to get into an accident, what would your loved ones need to know right away?
This episode introduces Dying Kindness, and walks through some practical notes on what you should have prepared for the first few hours of your possible incapacity o...

If you were to get into an accident, what would your loved ones need to know right away?

This episode introduces Dying Kindness, and walks through some practical notes on what you should have prepared for the first few hours of your possible incapacity or death.

When my father died in 2019, it wasn’t a surprise. He had diabetes for years and had been in decline. But I was surprised by the state of his paperwork and finances and everything. Whenever I asked about his plans he told me everything was “taken care of.” After he died, we discovered this was only half-true and I watched my stepmother struggle to make decisions while she was grieving her husband of 30 years. She was frustrated. And angry. I am sure it all contributed to her death just five weeks later. I don't want to do that to anyone when I die. And I don't want you to, either.

This is Dying Kindness, a podcast about the details of death and dying. I'm Cianna Stewart, and I'm going to die someday. You will too. So let's all learn what we need to do, and make some key decisions before we die, in order to be kinder to those we'll leave behind.

Since this is the first episode, I figure I should start by telling you a little bit about who I am. Really that starts with who I’m not. I’m not a doctor or a lawyer or a funeral director or a death doula or any other kind of professional in the death industry. My interest in this topic is because I’m going to die someday. Beyond that, I do happen to be more comfortable talking about death than most people, maybe because I’ve known so many people who have died throughout my life, relatives and friends, of all ages from infancy to old age, from accidents, illnesses, and causes unknown. Some were expected, and some not. The first time I can remember doing a formal independent study of death practices I was 14, for an anthropology class. Then I worked in HIV in the 1990s, and was the primary caretaker for my roommate as he died from AIDS. A decade later I did research and wrote for a documentary series about pandemic diseases - that set me up well for having lots of opinions about COVID, by the way. I’m now in my 50s and many of my peers are grappling with more of the practical aspects of death, both their own and their aging parents. More than once, I’ve helped friends find a mortuary, plan a memorial, empty out a home. Yeah, I’m that friend.

For the purposes of this podcast, though, I’m going to play the role of reporter and host because, really, I’m not an expert in anything except being curious. I’m here to learn what is useful for you and me to know about death and dying, and how best to plan ahead in order to be kind to those we’ll leave behind.

I’m going to get pretty frank on this show, directly speaking to my future death and to yours. I hope that you can hang with that. It’s a powerfully grounding practice to contemplate our own deaths. It can clarify what we want to do while we’re alive, bring things into focus.

To understand my motivation for this podcast, imagine what your loved ones will be going through when you die. Put yourself in their shoes. They’re going to have an emotional reaction to your dying. They’ll be grieving or angry or shocked or who knows what? They’ll be stressed. And that means they won’t be thinking so clearly. They can get easily overwhelmed and be at risk of making poor decisions. You can help them. You can make a written record of your information and decisions and keep it organized. I am putting all of mine into what I call a death binder. It’s a literal 3-ring binder that I’m storing in a fireproof file cabinet that my brother can access since he’s my executor.

I truly believe it’s an act of kindness to take care of this stuff. I know it can be hard to think about our own deaths, but avoiding it is like outsourcing the discomfort, like dumping it on other people - the people we say we care about. So let's all make it a little bit easier on them by facing the hard decisions ourselves and being sure that all of our information is in a place that they can find.

As I go through the following list, I’m guessing you might want to grab a pen and paper. You could also download this info later from my website, DyingKindness.com. That way you can just listen and keep doing whatever it is that you’re doing - driving, cleaning, taking a walk, whatever. I like to picture you thinking about this stuff while you’re doing everyday things. Talking about death shouldn’t be precious. We should strive to restore seeing death as part of life instead of hiding from it, putting it behind closed doors.

I believe our culture here in the U.S. has become too disconnected from death and dying. We’ve moved away from having families handle everything and towards a professional industry of death management. We talk about “traditional” funerals being an open casket and burial in a commercial cemetery, but even though we call it “traditional,” it’s really only dominant here in the U.S. Truth be told, we haven’t been doing it very long here, either. And all these practices are continuing to change. More on that in the future. I can go on and on, but I want today to be more practical. I’ll save the history lessons for future episodes.

Today’s focus will be on what would be needed in the first hours if you had an accident or a heart attack or something else sudden and unexpected happened to you. Some of this is necessary for all deaths, but things are different when the dying process is drawn out and there’s time for conversation. Also, accidents can happen to anyone at any age and I’d like to encourage everyone to do this work now. We need to stop thinking that death planning is only for the old or the critically ill.

OK enough preamble. Let’s begin. I’m going to start by inviting you to picture yourself in this scenario so that you can get clear on what you do and don’t have organized. Ready?

Imagine you’re on your own somewhere in a city and you get into an accident. You’re unconscious and seriously injured. Someone has called 911. You get taken to a hospital and it’s touch and go. What’s next?

In an accident, the first thing emergency personnel or hospital staff or whoever needs to is to know who to call. These days, they’re most likely going to look for your cell phone to find your emergency contact. Do you have that stored in your phone? If you have an Apple or Android phone -- or probably any phone -- you do this through your Settings menu. You can also put in any key medical history or medication info that they’ll need. You should do this because they can get to this without having to unlock your phone.

Also, make sure that your emergency contact knows how to reach other critical people in your network. Many of us have a relative as our main contact, even if they don’t live nearby. You don’t want to make them struggle to figure out how to reach your friends or even which friends to contact. If you’re anything like me, you have multiple friend circles and they don’t all know each other. So create a list somewhere to help them get the word out.

Once the hospital reaches your emergency contact, here are other urgent things that they’ll need to know and that you should have already discussed and set up:

Now let’s imagine that we’re back in the hospital. Thankfully, your key people had time to get there. They’re gathered in the waiting room. After a long wait, eventually the doctor comes in and lets them know that you died. Here are the next things that they’re going to be asked about:

OK take a deep breath. Come back to noticing yourself alive right now. How are you feeling? Was that a lot? That only covers the first few hours. I’ll remind you that now that you’re aware of what’s needed, you have time to take care of it.

Here’s a quick review of what we discussed:

In the next episode, I’ll cover what your loved ones will need to know after those first hours, in the first few days after your death, like funeral or memorial services and how to handle the finances.

Remember you can get these lists and more at my website, DyingKindness.com. I would also love to hear what you thought about this episode, if you noted things I missed, or any questions about death and dying that I might be able to help get answered.

I’m just getting started and I have so much more planned for this podcast! I’m going to cover a wide range of topics, from the extremely practical and straightforward, to issues that are sensitive and complex. On some episodes (like this one), it’ll just be me, but in others I’ll talk with experts in various industries like legal, financial, medical. I’ll try to get answers to your questions and have conversations we don’t usually have.

I hope that you stick around and check it out!

Thank you for joining me on Dying Kindness. The music is by Blue Dot Sessions, Thanks to Melody Chang for the beautiful graphics. Everything else was done by me. You can find show notes and more resources at DyingKindness.com.

Until next time, I'm Cianna Stewart, and I'm going to die someday - but hopefully not before the next episode.

I wish I could translate the hints about the dead young men and women,

And the hints about old men and mothers, and the offspring taken soon out of their laps.

What do you think has become of the young and old men?

And what do you think has become of the women and children?

They are alive and well somewhere,

The smallest sprout shows there is really no death,

And if ever there was it led forward life, and does not wait at the end to arrest it,

And ceas’d the moment life appear’d.

All goes onward and outward, nothing collapses,

And to die is different from what any one supposed, and luckier.

Need help getting organized? Sign up for our newsletter and get our template for your Death Binder!

Email has been submitted.